Throughout the UK where there is suitable habitat, except for the north of Scotland and most of the Scottish islands.

Jays will only occur where there is plenty of cover, and favour mature deciduous woodland and in particular with oak trees. Coniferous woodland will be used though, plus parks and large gardens with plenty of mature trees.

Although the Jay is by far the most colourful and striking of the crow family in the UK, it is a shy bird of typically woodland habitat and therefore often hard to see. Its plumage is very attractive, with pinky-brown tones overall, black tail, white rump, black facial stripe like a moustache, plus a striking blue flash on the wings. Its loud shrieking call often gives its presence away in dense woodland. It is not a common garden visitor, but may visit feeding stations early in the morning in some areas where there is suitable habitat very close by.

What sound does a Jay make?

The Jay’s diet, like most corvids, is highly varied and includes insects (especially caterpillars and beetles), earthworms, mice, eggs and young birds, seeds, grain and fruit. It has a particular liking for acorns and these form a key part of the diet in the autumn and winter months, with the supply for the latter coming from acorns it hordes in the former. The species is generally not easy to attract to feeding stations, however, in suitable areas, will sometimes come to bird tables and ground feeders to take whatever seed is available.

What should I feed Jays?

We recommend the following products to not only attract more Jays your garden, but also ensure you are meeting their optimal dietary requirements. 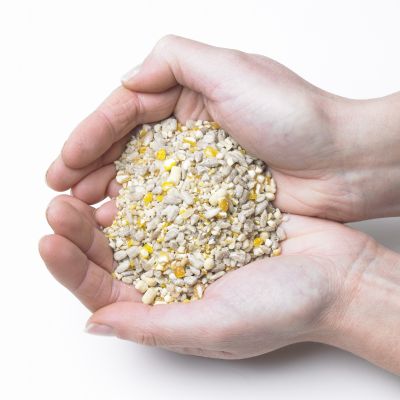 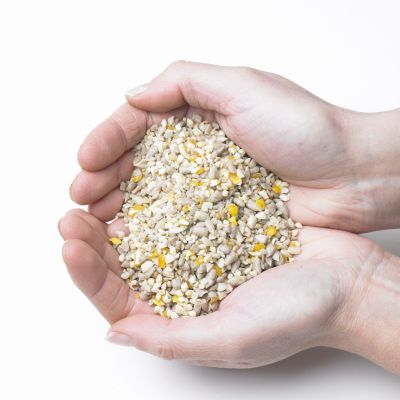 The nest is built in a tree and generally against the trunk or in a fork, and usually at least two metres above the ground. It is well hidden and basically consists of twigs, plants stems, and may also include mud as a binding material. It is lined with fine plant material and hair, making an especially neat inner-cup. Incubation of the five or six eggs is by both male and female birds, with both sexes also sharing the task of bringing food to their young. There is one brood per season.

Outside of the breeding season Jays may form small groups, though generally speaking they are not a sociable bird and even a breeding pair do not spend that much time together. Like all members of the crow family, Jays are very intelligent. A measure of this intelligence is their ability to remember where they buried acorns to feed on during the winter months. To give this some context, a single Jay may bury up to 3000 acorns in one season – though they don’t of course remember where they all are, and hence why Jays are rightly credited with helping to spread oak trees.

The UK population shows long-term stability overall, though more short-term has shown quite sharp declines and spells of recovery in recent decades.