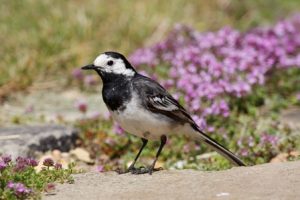 If ever a bird was given a name which largely described both its appearance and behaviour in just two words, it would have to be the pied wagtail: It is indeed black and white and, without question, it does wag its tail – in fact almost constantly when it’s feeding on the ground.

A Pied Wagtail in the garden at Vine House Farm

Just why is that wagtails wag their tails?

The definitive reasons for that wagging tail have never been proven, but research points to two main factors: Firstly, the tail movement disturbs insects in the typical feeding habitat of very short vegetation (e.g. a field being grazed by livestock) which the bird then quickly catches and often just off the ground. Secondly and given its apparent vulnerability to predators when it feeds in such relatively open spaces, the near-constant tail movement suggests alertness – i.e. ‘you won’t catch me’. The habit may also have other social purposes, but in any event there’s no question that evolution has been at work over many millennia to result in such distinctive behaviour which works to the species’ advantage.

What do pied wagtails eat?

Although pied wagtails are essentially insectivores, in the winter months when insects are less easy to come by, they will also eat small seeds and tiny food scraps. This is why this unmistakeable black, white and grey bird is such a common sight in motorway service station and supermarket car parks during the winter, as it moves between parked vehicles in search of dropped food. This partial switch to more readily available food is also an opportunity to attract them to you garden (in particular if you live in an urban area as large numbers of the species often move to towns and cities in the colder months), with Chopped Peanuts or Sunflower Heart Chips fed on a ground feeder being potentially suitable foods.
If you’re lucky enough to have pied wagtails nest in your garden or nearby, then they’ll also readily take live mealworms.

The pied wagtail is not actually a separate species

Pied wagtails are not actually a distinct species of wagtail, but in fact a race of the white wagtail. What’s interesting though, and unusual relative to other bird species on our islands, is that pied wagtails are largely exclusive to the British Isles, with the white wagtail replacing them on mainland Europe (though there are some breeding populations of pied on the French and Dutch coasts). 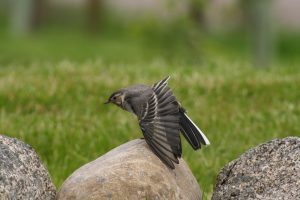 Young pied wagtails do not have the distinct black and white plumage of adults, as this fledgling shows as it flexes its wings whilst waiting for one of its parents to return with food

Choosing unusual and highly varied nesting sites is also a feature of the species, with successful nests being recoded in all sorts of location. These include: a stack of wooden pallets in a builder’s yard, in the wheel arch of a disused tractor, on a ledge under a road bridge, and, for a more natural setting, high into a mountain glen in Scotland and simply onto the ground as no other options available. Despite this wide diversity in nest sites, the nest itself is pretty-much always the same: a neat cup of grass and plant stems, then lined with wool, feathers and hair – depending on what’s locally available.

Although not gregarious in daylight hours – indeed male pied wagtails will often defend a feeding territory even in the winter months – during the winter very large roosts can form at dusk in specific locations in town and city centres as the birds get ready to sleep communally. Numbers of individual birds in these roosts have been recorded as high as 4000, as they noisily cram onto trees and adjacent buildings in streets and squares.
For more information about the pied wagtail, including more images and a UK distribution map, take a look at our bird library.